For the Boys: Marguerite Higgins

Please bear with me a moment while I digress with a post that has nothing much to do with the movies. I was doing some research (i.e. wasting time) on the Life image archive and ran across some pictures of war correspondent Marguerite Higgins in Korea in 1950. After doing some research on wikipedia and elsewhere, she has instantly become one of my heroes. So, on this anniversary of September 11, 2001, I wanted to share her story with my faithful readers. 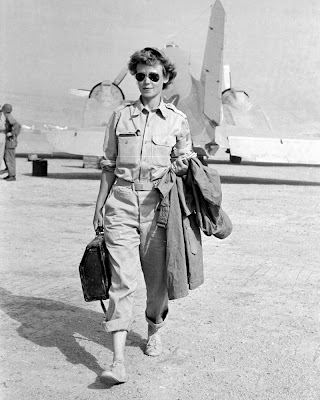 Marguerite Higgins, (September 3, 1920-January 3, 1966), was an American reporter and war correspondent. Higgins covered World War II, the Korean War and the war in Vietnam, and in the process advanced the cause of equal access for female war correspondents.

Higgins was born in Hong Kong while her father, Lawrence Higgins, was working at a shipping company. The family moved back to the United States three years later. She worked for The Daily Californian, the University of California, Berkeley newspaper, her freshman year at college. After graduating from Berkeley in 1941 with a B.A. in French she received a masters degree in journalism from Columbia University. 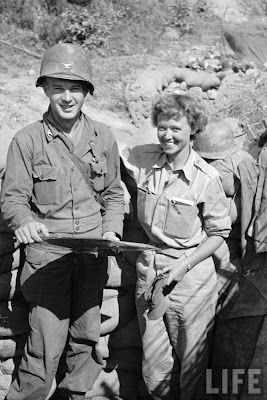 After working for the New York Herald Tribune for just two years, Higgins persuaded them to allow her to become a war correspondent in 1944. She was first stationed in London and Paris, but was reassigned to Germany in March 1945. There she witnessed the liberation of the Dachau concentration camp in April 1945 and received a U.S. Army campaign ribbon for her assistance during the SS guards' surrender. She later covered the Nuremberg war trials and the Soviet Union's blockade of Berlin. 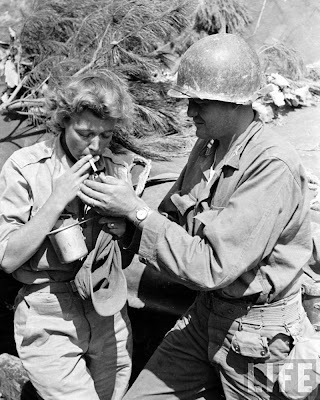 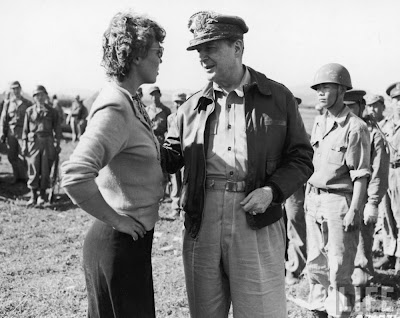 In 1950 Higgins was named chief of the Tribune's Tokyo bureau. Shortly after her arrival in Japan war broke out in Korea. One of the first reporters on the spot, she was quickly ordered out of the country by General Walton Walker, who argued that women did not belong at the front and the military had no time to worry about making separate accommodations for them. Higgins made a personal appeal to Walker's superior officer, General Douglas MacArthur, who subsequently sent a telegram to the Herald Tribune that said: BAN ON WOMEN CORRESPONDENTS IN KOREA HAS BEEN LIFTED. MARGUERITE HIGGINS IS HELD IN HIGHEST PROFESSIONAL ESTEEM BY EVERYONE. This was a major breakthrough for all female war correspondents. As a result of her reporting from Korea, Higgins was the first woman to win a Pulitzer Prize, in 1951, for international reporting, sharing the award with five male war correspondents. 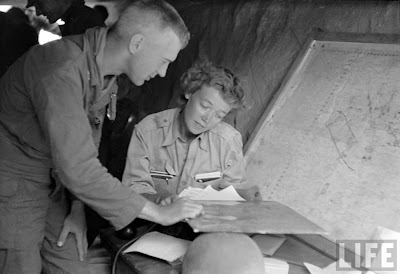 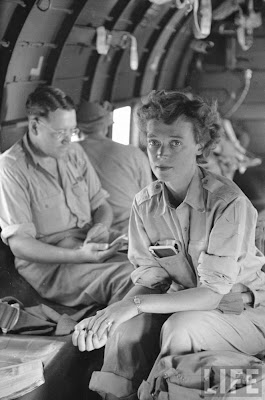 In 1952, Marguerite married William E. Hall, a U.S. Air Force Major General, whom she met while bureau chief in Berlin. Their first daughter, born in 1953, died five days after a premature birth. In 1958 she gave birth to a son and in 1959, a daughter. Higgins continued to cover foreign affairs throughout the rest of her life, interviewing world leaders such as Francisco Franco, Nikita Khrushchev and Jawaharlal Nehru. In 1955 she established and was chief of the Tribune's Moscow bureau. In 1963 she joined Newsday and was assigned to cover Vietnam. She visited hundreds of villages, interviewed most of the major figures and wrote a book entitled "Our Vietnam Nightmare." While on assignment there in late 1965, Higgins contracted leishmaniasis, a tropical disease that led to her death on January 3, 1966, at age 45 in Washington D.C.. She is interred at Arlington National Cemetery, with her husband Lieutenant General William E. Hall. 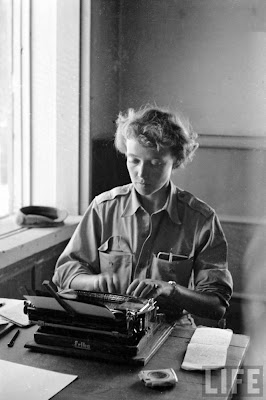 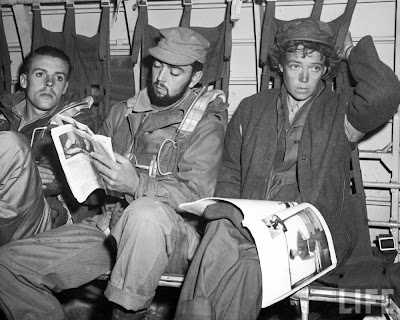 In 2002 Marguerite Higgins was honored by the US Postal Service as part of their "Women in Journalism" series. 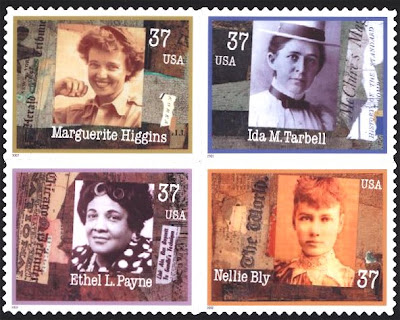 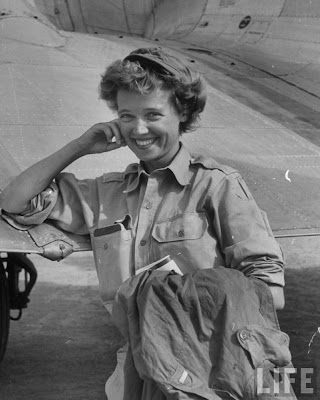