For the Boys: Veronica Lake 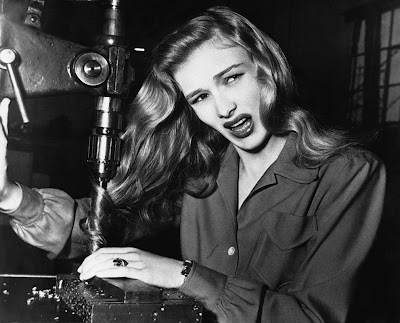 During the early 1940s Veronica Lake was considered one of the most reliable box office draws in Hollywood. A stray lock of her shoulder-length, blonde hair during a publicity photo shoot had led to her iconic "peekaboo" hairstyle, which was adopted by female fans all over the country. During WWII, US government officials asked Lake to wear her hair up for the duration, as many women who imitated her hairstyle were getting their hair caught in assembly-line machinery.
Posted by k5psb at 12:00 AM