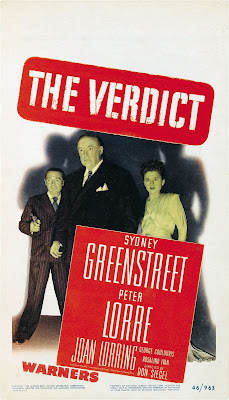 This is the final film pairing two of my all-time favorites, Sydney Greenstreet and Peter Lorre. Greenstreet was never better as Victorian era Scotland Yard Superintendent Grodman who mistakenly sends an innocent man to his death. He is condemned in the press, and forced to resign - to be replaced by his rival Superintendent Buckley. (George Coulouris)

Grobman takes his forced retirement as an opportunity to work on a memoir on the great crimes that he has been involved in, illustrated by his slightly boozy artist friend, Peter Lorre. In the days that follow, Grodman frets over the fact that the evidence that convicted the innocent man was the word of the nephew and heir of the victim, who is a friend of both his and Lorre's character. When the nephew (Morton Lowry) is himself found stabbed to death in a locked room, it is Greenstreet's turn to watch his successor struggled to unravel the mystery.

British character actress Rosalind Ivan gives a vivid performance as Lorre's hysterical landlady. Others in the supporting cast also acquit themselves well: Holmes Herbert as the stern head of Scotland Yard; Arthur Shields as a distressed clergyman; Paul Cavanagh as a Member of Parliament with a secret to protect; and little Clyde Cook as a helpful burglar. 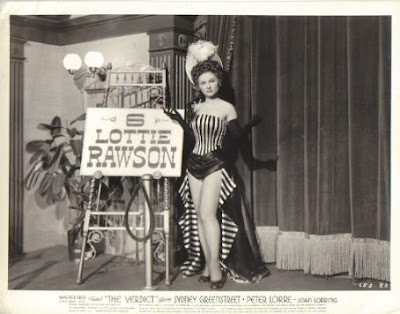 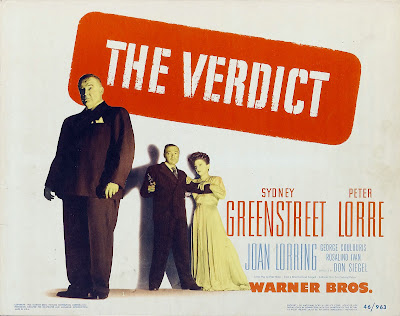 The Verdict (1946) is an ingenious locked room mystery that kept me guessing until the very end. It's not to be missed.
Posted by k5psb at 1:14 AM