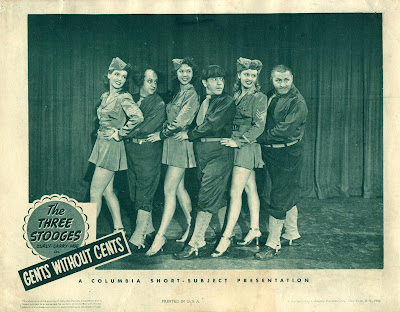 Lindsay Bourquin, Laverne Thompson & Betty Phares with
The Three Stooges (Moe Howard, Larry Fine & Curly Howard)
in Gents Without Cents (1944)
Here is a clip from this film of the Stooges doing the famous "Slowly I Turned" (aka "Niagara Falls")routine:

Although often credited to Abbott and Costello, due to it's appearance in the feature Lost in a Harem (1944), this skit first appeared on film in the short Gents Without Cents, which was released 4 months before the Abbott and Costello film. The truth is that the routine was not original to either group, but was actually a very old Vaudeville skit.
Posted by k5psb at 12:00 AM