For the Boys: Linda Darnell 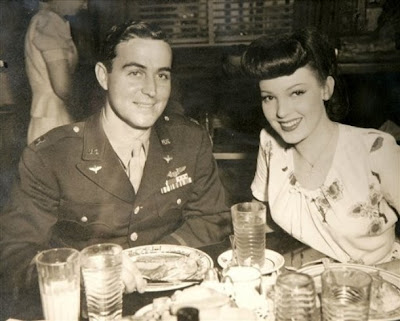 Captain Fred Hargesheimer having lunch with actress Linda Darnell in Hollywood
Fred Hargesheimer was flying the photo-reconnaissance version of the P-38 when bullets from a Japanese plane hit his left engine and he was shot down over the Japanese-occupied island of New Britain in 1943. With the help of island natives he eluded capture for eight months before being rescued. In 1963 Hargesheimer returned to New Britain and helped establish a school for the villagers that helped him during the war. (AP Photo/Courtesy of Fred Hargesheimer)
Posted by k5psb at 12:00 AM