Max Schreck in Nosferatu, A Symphony of Horror (1922) 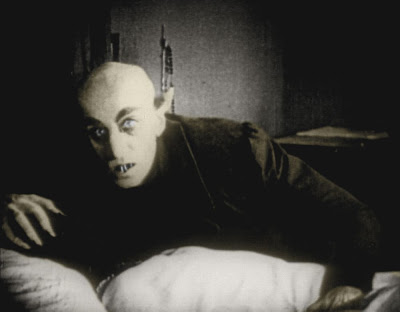 Max Schreck in Nosferatu, A Symphony of Horror (1922)
In 1921, director F.W. Murnau wanted to make a horror film (you might more accurately say he wanted to invent the horror film) based on Bram Stoker's novel, `Dracula,' but was denied the rights to the property by Stoker's estate. Ignoring the niceties of copyright law, he unabashedly filed off the serial numbers and made the movie anyway. The resulting work remains a must see for any serious student of film.
Be warned! This is not your urbane, charming, Bela Lugosi vampire. This is not your Gary Oldman vampire transforming himself from grotesque to handsome at will. This is not your dashing superhero vampire lightheartedly scampering around in 'True Blood.' Oh no. This is a hideous, disease infested creature that descends to us direct from the anxious heart of the Dark Ages in Eastern Europe. Direct from the gut fear of the Black Death. Wooden stakes, silver chains and brandished crosses will avail you nothing. This is evil, singular, powerful and pure.
Murnau's vision is not intended to be attractive. It's hard to watch. Watch it anyway. :)
The PD version of Nosferatu (1922) is available on archive.org
Posted by k5psb at 12:00 AM